Sir George Zambellas on The Digitisation of our Brains 

On 15th September 2022, Sir George Zambellas lectured on “The Digitisation of our Brains” at the Live! Event Center in Hanover, Maryland, following an invitation from the Cybersecurity Association of Maryland (CAMI).

CAMI is a state-wide, non-profit organization that views cybersecurity as a strategic issue, and serves Maryland’s cybersecurity ecosystem through advocacy, education and community building.

In his lecture, Sir George Zambellas teased out some of the themes that he believes are emerging in our human behavioural evolution. Themes that are emerging because of our rapidly evolving relationship with, and dependency on, technology.

Sir George laid out a challenging vision as to where this human-technology partnership may lead. He described the partnership as the first ever technology-centric bud on the human branch of the evolutionary tree – an indicator of the possible self-determined evolution of technology.

Sir George Zambellas suggested that, as a species, we’re rather self-centred. After a paltry 300,000 years or so of existence – on a 4 billion year old planet – we humans see ourselves inevitably at the centre of the next phase of evolution.

He went on to suggest that technology might eventually look after itself – and look after humans – at least for as long as we are useful!

Unsurprisingly, numerous searching questions followed from what comprised of a large number of senior business ambassadors.

The lecture was a resounding success, seemingly enjoyed by all. Comments included phrases such as “thought-provoking”, “insightful” and “interesting”.

After listening to the lecture, one participant commented “it is a brave new world in which we are already immersed, interesting to see what it looks like in the next 10 to 20 years“.

Admiral Sir George Zambellas did not disappoint! His remarks about the effects of technology on the way we now think were spot on. The tree of life diagram really was telling on how we are just a blip in time and how fast technology has become a part of our everyday life. I was happy to hear him say that technology is good for our children, but it shouldn’t take the place of spending quality time playing and interacting with them one on one. That is important to spend time outdoors observing nature and our surroundings. Sir George spoke about privacy issues and the importance of cyber security but there is one thing that we would not have control over and that is the threat of solar flares and how they can interrupt the technology flow. As we learned after his presentation, this has already occurred earlier this year knocking out several satellites.

Our members and guests shared with us their comments that Sir George’s remarks were fascinating and thought provoking, which we agree! He kindly spent quite a bit of time meeting our attendees after his presentation. We truly enjoyed meeting him and look forward to seeing him next time he visits Maryland. 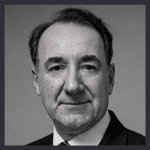